This was the first I’d heard of what was happening in Dhaka — Bangladesh’s capital and most populous city with over 18 million people in its metro region. In the beginning, there was no telling it would come to this.

It all started on July 29th, when unmaintained roads in Dhaka led to two bus drivers accidentally killing two students.

This inspired students, mostly aged 13-20, to begin protesting for safer road conditions in the area. They created laneways, directed traffic, and even began inspecting licenses of passers by, including the police and government officials. All they wanted was safer road conditions, and by many accounts, they were actually doing a good job too. Here’s a meme! But then things took a drastic turn. As per the usual script, the government’s response was initially to send out uniformed officers who shot at crowds with rubber bullets, but something else happened in Dhaka that was entirely different.

Groups of counter-protesting students began to infiltrate the crowd, and that's when the chaos broke out. The exact atrocities are hard to define because the Bangladeshi government prohibited any media from reporting on the story, however, there have been reports of women being carried into buildings to be gang raped for hours, people whose eyes were gouged out, and so many other heinous acts that it’s hard to put into words.

So, who is this student army attacking their countrymen? Although they’re wearing masks, they’re officially members of the BCL. So who are they? Here’s a breakdown from Redditor r/anongyde2.

“The ruling party of Bangladesh, Bangladesh Awami League, is broken down into 3 major parts :-

Disclaimer: This is a very generalized and simplified version of reality.

So, as a politician, this is how your career goes - BCL when you're in college/university, BJL until the age of 35, and then you join BAL.

As a member of BCL, you're the youngest members of the hierarchy, so you do the dirty work - extortion, campaigning, mobilizing youth groups, and yes - killing people. With the eventual goal of rising up in the ranks and becoming like a minister or something.

Yes, BCL is a student group. Officially. On paper. There are many members of BCL who are very engrossed in their university work, many who have openly resigned from their positions in BCL after what has happened in the last few days. But that number is the minority. The majority is interested in dirty politics and violence, and they're just students on paper.

You know how there are student athletes in some countries whose main focus in university is to practice and play for the school team? It's a bit like that, just a lot more disgusting.”

So, what has the government’s response been throughout this whole thing? This may come as a shock, but they’re blaming the original protesters for beginning the violence. They’re saying that what citizens have been hearing and reading is a complete lie. This is the message, as well as its translation, the BAL sent to their citizens (both posted by r/Rid0y): 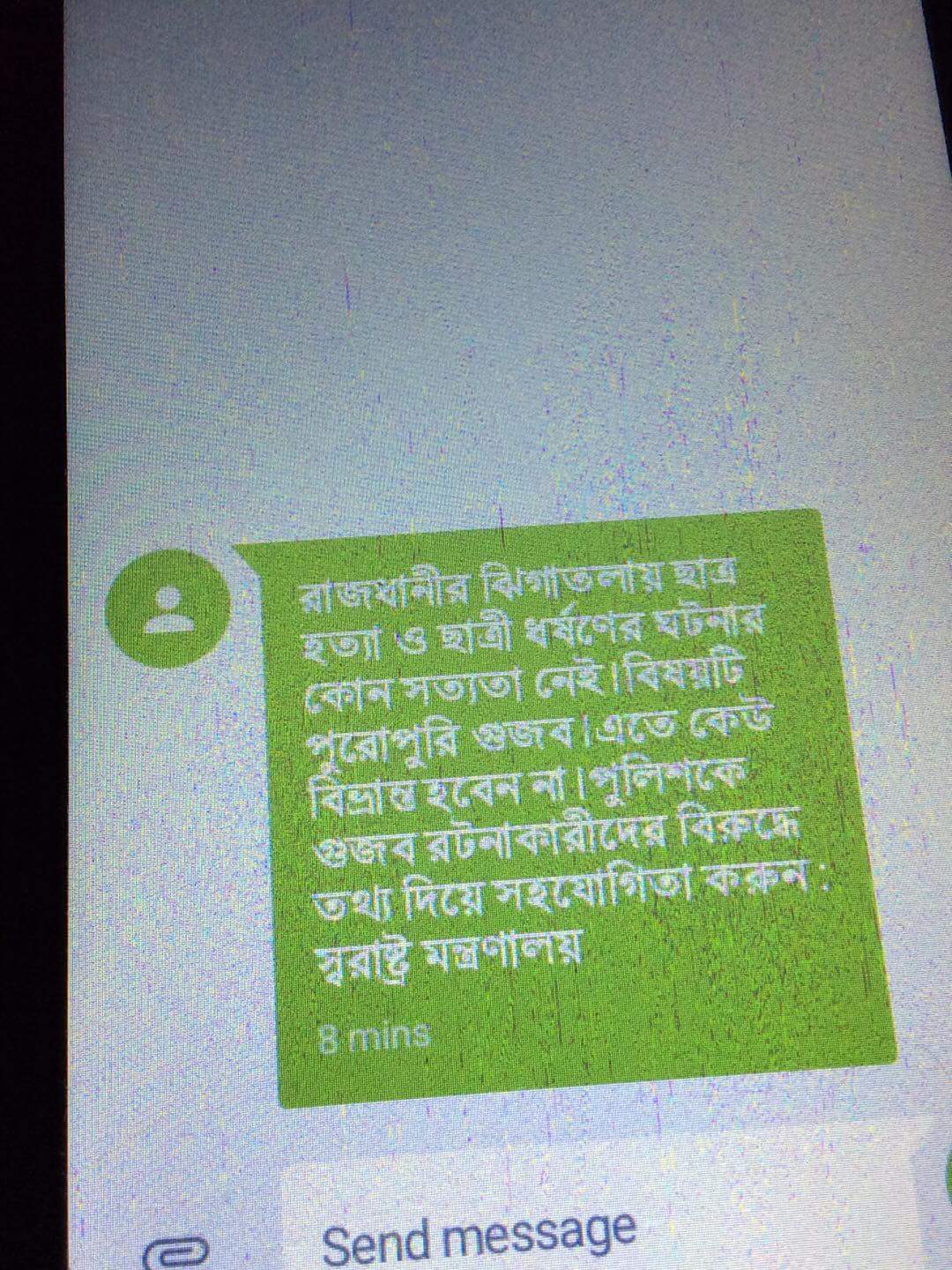 "There is no authenticity of the incident of student murder and rape in Jhagatal in the capital. The matter is totally rumored. Do not get confused in it. Cooperate with information about the rumors of the policeman: Ministry of Home Affairs"

But these images tell a very different story: Student protesters eyes were gouged out by thugs. Fellow students covered his eyes with the national flag of Bangladesh Females in Dhaka are guarded by teenage students after 4 girls got raped today by the thugs of the Bangladeshi government for protesting against dangerous roads. Bangladeshi student getting carried to hospital by student's.after getting raped by gov thug's Student Blind One Eye School students have been protesting in demand for safer roads for 7 days in Bangladesh. Today, they were outnumbered and attacked by the student wing of the Bangladeshi government.

The government has also responded by shutting down the country’s internet and Facebook, so these young people are now having an even more difficult time presenting their story.

Look, I’m not a journalist. I’m not affiliated with any paper, and I don’t know much about the standard editorial practices or whatever, but frankly, we live in a different world now. Despite an onslaught of primary source material online, standard journalism is paralyzed to report officially confirmed facts and photographs. But when an authoritarian government cuts ties to those things, where are we to turn?

I’m writing this because these protesters are asking us to share their message, and I’m trying to use what limited platform I have to do so. If you’d like to help, they’re looking for translators for their live update feed on Reddit, so if you know of any Bengali speakers, they can be a great help. Here's the link.


Thank you for reading.